Back in March, I did a post on the performance results of storage spaces in Windows 8 as well as the server product.  I think it was pretty obvious that I was really not impressed with either, however the version for Windows 8 was far worse in the area of performance.  Given that it was a beta product, I hoped that it would be improved by the time it hit RTM.  Now that the release preview is out, I was curious as to whether Microsoft had addressed the somewhat poor performance of the beta version, so I wanted to retest key benchmarks so that it could compared it to the beta version.  Below is the link to the original articles for reference.

For those who have not seen it, here is a quick pictorial walkthrough on creating a Storage spaces volume in Windows 8.  As I did in the original article, I focused on the parity configuration as I feel this is best setup for home server users as well as anyone that needs a large volume but still wants to protect their data.

As you can see from the benchmarks below, the performance is still terrible in most tests.  It got worse on some tests, while others got a bit faster.  The one that is most important to me is the continuous write performance and that was only marginally better.  All in all it is still a disappointment in terms of performance and does not perform on par with its sibling, Server  2012.  The thought of getting slightly better than flash drive performance tells me that this not for serious users.  Of course, it is included with windows and will not cost anything to use it, as opposed to hardware solution, however do not expect decent performance from it at least at this time.  Maybe we will see this addressed in SP1 but as it looks now, unless they have a major tweak to this before RTM it will be a major disappointment in terms of speed.  That said, if you do not care about speed because of your use case, such as a backup source or archive, then you will find this very easy to use and very straight forward.  As I mentioned in the Server 2012 article, the storage spaces volumes are interchangeable meaning that if you have a volume created in Windows 8, it will be read jus fine on Server 2012 and vice versa.  The performance however is significantly different between the two.

Read my review on Server 2012 performance: 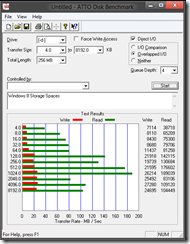 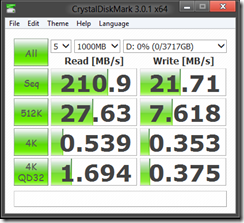 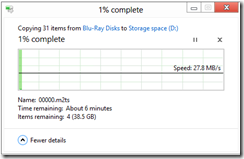 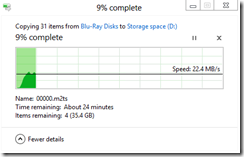 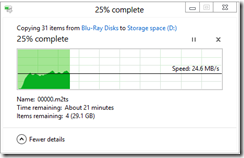 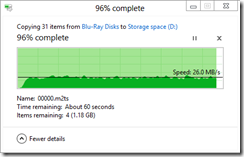