Skip to content
Home/Hardware, Home Automation, Mobile, Systems/Using the Amazon Echo with the ISY 994i
Previous Next

Using the Amazon Echo with the ISY 994i

I recently purchased the Amazon Echo and have been enjoying using it on a daily basis. When they released the integration with Insteon, I was curious and hooked up an Insteon hub to experiment with it for a couple of weeks. For certain things, I found it very convenient and was surprised how well it worked. The other day I ran across a tweet and discovered that various people were using the ISY 994i with the Amazon Echo.  I began to look into how they were doing it as the ISY is still my hub of choice and is already tightly wound into my everyday life. When I started digging, I found various people had used some custom emulators and other ways to bridge the gap, but none of that truly appealed to me. As I researched into the Universal Devices web site I found that they had a beta service available that integrated the ISY to the Amazon Echo as a native skill without the need of using emulators. This truly perked my interest so I decided I would give a shot.

If you have worked with the Amazon Echo you know that it works on the basis of skills. You have to enable an active skill and the Echo “learns” that skill. Universal Devices posted a beta skill which enabled the Echo to communicate and command the ISY. This is simple on the surface but there is a few steps you have to do before you can load the amazon app and enable the skill. Before I get into the process of getting things linked, let me first explain the idiosyncrasies of my particular setup. First off I use a mobile app called Mobilinc for remote access to all my home automation including cameras (prior to switching to Blue Iris), Thermostat, irrigation, and of course all the lighting. With that app is a paid service (third party) called the “Mobilinc Portal” which basically does two main functions. First sync’s all the mobile devices to the ISY, and second, it provides a Dynamic DNS function of sorts that links all your mobile devices to your ISY when you are away from home.

If you follow the steps on the outline from the Universal Devices Website, it will tell you that you have to purchase a module called the ISY portal for $49 (for two years) and that doing so you will disable the Mobilinc Portal which I rely on heavily. Once hearing that, I immediately contacted Universal Devices (great customer support, had a detailed response in less than an hour) to find out if this new portal would still allow me to use my mobile apps as those were critical for me. I also asked them if they could credit the money I paid for the Mobilinc to the ISY portal but unfortunately they could not as it was a third party site. That all behind me, they sent very detailed instructions on how to use the new portal with my mobile apps. It seemed pretty easy so I went ahead and canceled my Mobilinc Portal and decided to give it a try. 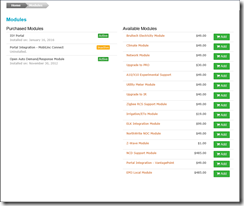 Setting up your ISY

The first step was to purchase the ISY portal which is done through the ISY itself. Once I purchased it and setup the account, the first thing I did is to setup my mobile apps to make sure that they were working before I got too far into setting up the Echo. Long story short, it worked like champ and within a few minutes I was off to hooking all this up to the Amazon Echo. One minor thing, when I changed the sync method to the ISY portal on my mobile app, the device unique customizing such as favorites were erased and had to be recreated. Did not know that was going to happen but it was not a huge deal. All the important stuff was intact and the functionality remained unchanged.  Now on to link the Echo to the ISY. Below is a modified version of the web instructions they provide on their site. The process has a few steps in it but is pretty straightforward.

1. Once you have purchased the module you need to create/login to ISY Portal. Go to the link https://My.isy.io and login to the account that you created. 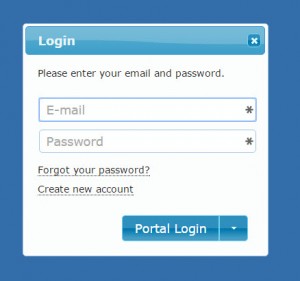 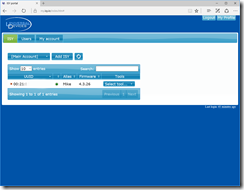 2. Register your ISY to your account in ISY Portal using ISY’s UUID (Help | About). To do this click on the Add ISY button and copy/paste the UUID.  You should have this information available ahead of time to make this a bit easier. 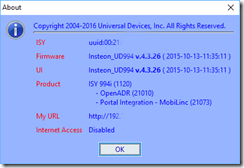 3. Giving permission to ISY to communicate with ISY Portal

a. Login to the Admin Console
b. Click Configuration Tab and then the Portals tab
c. You will see a request for access from your account in ISY Portal
d. Approve it

Here is a 10 minute Video that walks you through the whole process: https://www.youtube.com/watch?v=EiAaGuXaFTI&feature=youtu.be

Linking Echo to the ISY

Once you have completed the portal, the final step for the linking is to go to the Alexa app and enable the ISY skill (Settings, Skills, ISY). Once you have done that you are now ready to add the devices. By default, no devices will be discovered by Alexa. You have to go to your ISY Portal and specify each device you want to control with the Echo as well as to add the “SPOKEN” name that Alexa will understand. You want to keep the naming as easy as possible and avoid naming them with similar names such as Kitchen Lights, and Kitchen Islands. The preferred way would be to call them Kitchen, and Island. Sounds like allot of work but it goes pretty fast as all your devices are already listed so you just have to select the ones you want, name them and you are good to go. I have many devices but I only added the ones that I think I would use with Alexa. Things like Kitchen, Hallway, irrigation programs, family room lights, pool fill etc. I did not bother with bedroom, bathroom, or garage lights at this time as it was not needed but of course things will change and I can add them at anytime. In about 15-20 minutes I had setup all the items I needed, ran the discover devices from the Echo, and Alexa began its new role as a connected home controller. 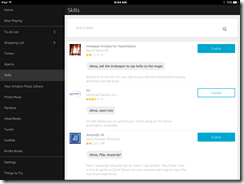 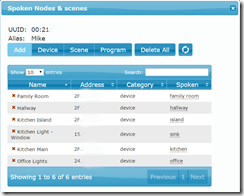 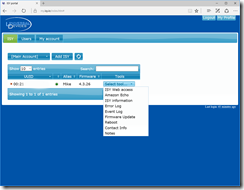 Despite having to switch the portal because I use Moblinc, the setup is pretty painless. Yes, it is a few steps but they are pretty straightforward and they only have to be done once. After I had things setup I found it to work extremely well. As a matter of fact, it worked much better than when I had the Insteon Hub attached to my system as a test platform. It is faster at controlling, and most of all, it expands my capabilities to well beyond what the average hub will do. I have many custom programs such as temperature, irrigation, and lighting that I can assign a name to and simply run it at will just as I would if I was turning on a light. Because it can be tied to the vast options of the ISY the possibilities are endless. Though this is beta, it works really well and I could not be happier with the outcome. Once I test for a little while I am going to add my IR receiver to my home entertainment system and work on voice control of the audio/video system.

Once I got past the wow factor and started to actually use every day, I was even more impressed. The accuracy of how it works, the flexibility to handle different voices in the house, and the numerous possibilities makes this a game changer for me. I never thought I would have found voice commands useful, but to my surprise it is not only useful, but it brings the connected home to non-technical people which opens up many new opportunities. In my opinion, the Echo takes voice control away from the gimmick status into true functionality. Overall, I commend Amazon and Universal devices for the work on this and getting this product out to the public very quickly. Even though this is a beta, it works extremely well and I look forward to new features in the future. If you have an ISY (or other HA Hub) than consider adding an Amazon Echo as it will open new possibilities. If you already have an Echo than consider adding some form of home automation hub. If you do add a hub and you opt for something other than an ISY, make sure there is existing or planned support for the Amazon Echo or you will be missing out on a great feature. 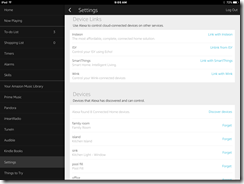 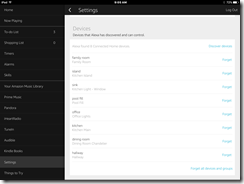