I have used security cameras for years and for as long as I can remember, recording/monitoring software has been buggy, not user friendly, and suffered from various performance concerns. Add to that the variation in manufacturers of cameras, and you end up with a difficult situation. For the past few years I had settled on iSpy as my software of choice as it offered me the power I needed, and supported the various camera types I had been using. It did what I needed despite being temperamental in several areas such motion sensing and scheduling.

Recently, I added 3 new high resolution cameras (2560×1440) and then things began to breakdown. During the process of adding the cameras the application kept crashing. After some research I found that I had to use a third party codex (VLC) to enable the application to work without crashing. In addition to this, during night mode operation, the video would cut out on these new cameras every few minutes and go completely grey. Again, after some research I found this was an anomaly of many of the newer IP cameras when used in conjunction with iSpy. After many frustrating hours, I knew it was time to look for a better solution.

After testing various solutions including some manufacturing specific applications like Reolink, and universal solutions like Milestone’s XProtect Go, I found the best solution for me was Blue Iris. I had tried to use this software in the past and did not have a good experience with it, but out of desperation I decided to try it again. Much to my surprise, after a couple of hours with the trial version I had everything setup and working perfectly, and within a few days of experimenting, I was sold and decided to purchase it. 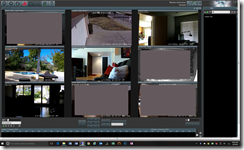 Unlike some other software, the installation for this is literally minutes. You download a very small file and the software installs very quickly without the need for additional downloads. The trial version you download and install is a full version so if you decide to buy it later, you only have to purchase a key and register the software.  You will not lose all the configuration work that you did setting up the trial version. As a nice bonus, you have the option in the settings menu to setup the software to run as a service so that it auto starts in the background.

Setting up your first camera is a bit confusing as it is not as automatic as it can be. That said, you really only need to know the IP address of your camera and if you configured a special port as I tend to do, then you will need that too. Though you can auto detect your camera, I found that seems to work best with certain cameras and not as well with others. Setting up manually seemed easier and more accurate than their auto-detect process. All things considered, it took me about 20 minutes to attach 9 cameras and get them working. If you have used camera software before you know that it can take you a bit of time to setup and configure your cameras. 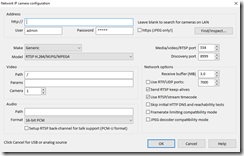 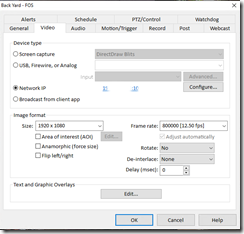 Blue Iris somewhat favors Foscam and it many variants but works with just about anything. I used it on Insteon, Foscam, and Reolink cameras, and all setup very easily. With the exception one of the new Reolink camera (RLC-411S), all the native functions for the cameras worked perfectly. The Reolink RLC-411S has optical zoom which Blue Iris did not recognize. It can be configured manually but I opted to postpone this for now as I used the Reolink app to set the range and view that I wanted. Once it was set, I do not have a need for moving it. I will probably go back and mess with it later on but for now it is not an issue in my particular setup.

The one thing that stands out in this software was the way it handles motion sensing. If anyone has tried to tune motion sensing before you can relate to how temperamental the process can be. Most of the time you end up with so many false triggers that you use scheduling and other tricks to minimize the issues. For reasons I cannot properly explain, Blue Iris handles this much better than iSpy when it comes to motion sensing. In fact, I initially thought it was not working. Even my outdoor camera showed little to no false recordings. In the case of the camera in the front of the house, it only triggered when someone walked by, drove by, or walked up to the house which were all conditions I wanted to capture. In the back yard, even moving trees from the wind did not cause a false recording. Using the same cameras on iSpy, I would have had many more false alarms. I was truly impressed with how easy it was to tune a camera to only capture when you want it to. Not to miss lead you, it will occasionally miss trigger, but compared to iSpy it is roughly 10 to 1 in terms of false alarms. I average about 2-3 per day using 9 cameras across a 24-hour period mostly from the outdoor cameras. None of the indoor cameras false triggered in the last two weeks of use. Just to clarify, I am looking at how often the trigger initiates a recording not that it detected movement.  Blue Iris will detect that something moved but depending on your settings, may not initiate recording.

Blue Iris has all the features you would expect such as a very elaborate scheduling system, various ways to record, and a very powerful motion sensing setup. One of the features that I found particularly useful and very easy to use was the clip export. When you playback a recorded clip, you have phenomenal amount of flexibility in playback speed (1 – 256x) and it is very easy to set the start and stop points where you want to use.  Once you found the area you want to clip, a click of a button will export the file to the location of choice.  One other unique thing that makes it easier, is once a recording is initiated, it opens one file per camera and appends the file for a specific period of time based on your settings (default is 8 hours).  This eliminates the need for having hundreds of small clips that you later have to sort through.  For additional information on numerous other features,  you can visit their website (http://blueirissoftware.com/details/). 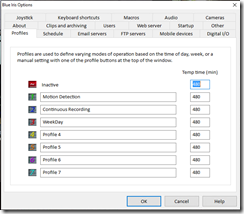 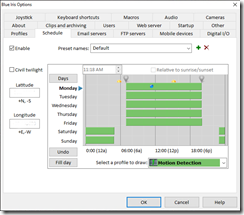 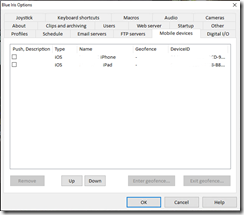 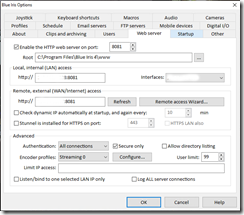 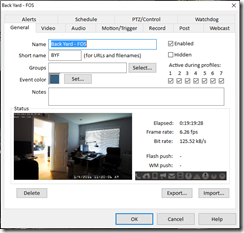 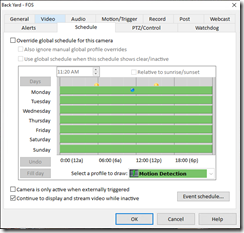 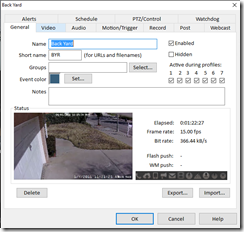 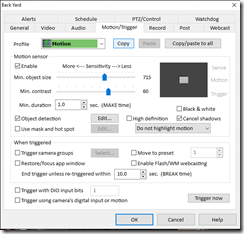 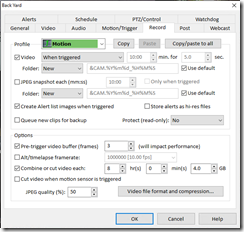 I do not have too many ways to compare efficiency and performance given that other solutions I tried either did not work with my new cameras or had technical issues of some kind. What I can say is that I am running this on a VM machine with Windows 10 as the OS. The host is a low power I5-4570S which runs 3 full time VMs that handle things like Plex. The host is barely using 10% of the CPU running all 3 VMs.  Running the 9 streams at full resolution, the VM machine operates at about 40-80% of the VMs CPU depending on what you are doing and what settings you have set. Given the resolution of several of the streams, and given it is running in a VM, the performance seemed pretty reasonable. That said, there are settings such as the pre-recording of frames which captures frames continuously so that you can see what happened ahead of the trigger that do increase your CPU usage. When I adjusted just a couple of the cameras to prerecord about 30 frames it only nudged a few percentage points, however if I adjusted every camera, I was able to max out my VM at 100%. If you are running this on dedicated hardware, you should not have much of an issue should you decide to overuse this feature.   The recent January release added support for hardware decoding so this should help significantly if you are on a standalone box and want to drive some features to the max.  For me, it was used mainly on the outdoor camera and worked very well for my setup.

This is another area where Blue Iris shines. In all the apps I have used to monitor cameras, the Blue Iris app is amongst the fastest I have seen. The live view and playback speed is amazing when compared to other solutions I have used. Though not the prettiest app I have seen, it is very feature packed and allows you to control many of the camera settings right from your phone or tablet. If there is a downside it is that you must also buy the app even if you bought the software. Other solutions throw in the app for free though it may not be quite as powerful. All things considered, I do not mind paying for something if it works. I would have preferred it if they priced it more aggressively, as $9.99 is a bit steep for an app especially after you just purchased the software package.

Though it will set you back around 70 bucks for the mobile app and software, in my experience it was money well spent. So far it has been the only solution that supports everything I want to do and all the hardware that I have. When you spend enough time working with crudely written software, the seventy dollars seems like a bargain and provides a solution that will scale upwards as your needs grow. Though it works with everything I have, it would be nice if they updated their camera support to take advantage of more of  the cameras feature sets. I am hoping that there is a future update that expands that support for newer more feature rich cameras like the RLC-411S.

Now that everything is set I am absolutely thrilled about the results. The effort needed to go from the initial installation, to full configuration was very short given the variety in hardware, the nuances of every camera install, and the various locations of the cameras. It is always nice to get software for free such as iSpy or others, but at the end of the day it has to meet your needs. If you are happy with your solution and it is working for you, this may not be of value, however if you are having issues or you are planning to add some of the newer cameras, consider looking at Blue Iris for a one stop solution. It has a relatively easy setup but with the power to tune your system to do just about anything you want it to do.