For a long time I have been an Onkyo fan.  Mainly because there are few MFGs out there that pack as many features in a unit for a given price range.  I did a short review on my last Onkyo, the NR-TX616, which I have been extremely happy with.  As luck would have it, it started intermittently giving me problems and cutting out the center channel.  It was making me a bit crazy when it would happen and so I decided I needed to replace the unit with something else.  I did the research and shopped around looking for what would give all the latest features, good sound, and not break the bank.  I looked at Denon’s, Yamaha’s, and Sony’s but at the end of it came back to the Onkyo.  Even though this is just a newer version of the unit I replaced, the difference in performance is significant.

Like most items today as well as its predecessor, there is an app for the receiver.  For the most part is is simply a remote control for the receiver.  Since the receiver is DLNA compliant, it does allow direct access to your content.  It is also Bluetooth enabled so you can play anything from your mobile device directly to the receiver.  These are all very cool features that worked well when I tested them, but as I control everything through my Harmony Hub and Harmony Remote, I really not use most of these features in practice.  It is however nice to have it just in case.

It read the media servers such as the Synology and Plex without a hitch and was able to play all the audio content, however the navigation is not the best I have seen and visuals are less than impressive.  Navigation and visuals remind me of the original Popcorn Hour media player. 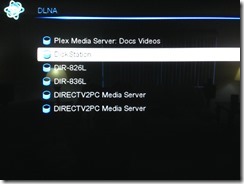 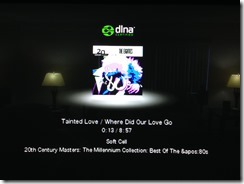 This is where things get interesting.  For the most part, this specs in about the same as the NR-TX616 that it replaced, but the sound is widely different.  Given no change to my speaker setup, the TX626 was about twice as loud at any give volume setting, and the sound separation, fullness, and depth where vastly different.  It was hard to believe that I was listening to the same class of device in the same price range.  I was very surprised and impressed with the results.  Granted, sound quality, depth, and fullness are very subjective, however it is hard to argue when you are comparing things in the same environment with all other equipment being the same.

Here is what my setup looks like.  Has not changed much since my review on the TX616 but it sure does sound different.  I have added things like the Roku and the XBox One, but the main setup has remained mostly unchanged. 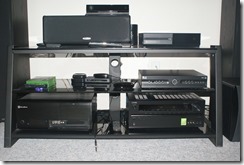 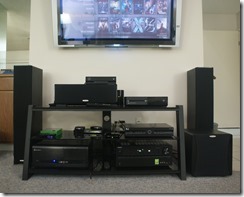 What started out as a “replacement”, turned out to be a huge upgrade that I did not expect.  Had I know it would turn out this way, I might have done it awhile ago.  I guess it also pointed out that specs alone do not always tell the story so it might be worth while to sound test a unit before buying one, as they are not created equal.  I am very happy with my purchase and I am sure this will last well into the future and will be there prepped and ready to plug in a 4K screen….