Many people struggle with setting up a wireless network that spans over multiple access points, or just simply adding an access point to an existing wireless router so that you can get better coverage. Some manufactures make it a bit easier, while others make it a real science to setup correctly. In most cases this can be simplified with a bit of work and the outcome will make it worth your while.

In today’s average home we are depending more and more on wireless networking. Whether you are using security cameras, media streaming devices, or simply want to surf the internet while sitting in your back yard, signal strength and bandwidth have become a primary concern. The main problem people run into today is that in many cases, you simply cannot just add an additional access point and get the results that you want, especially if you are mixing brands and model numbers. Depending on your house topology, construction, and the number of competing neighbors, you may actually decrease the effectiveness of your wireless network when trying to expand it. “Most” of the time, when you setup your first wireless router, the default settings work perfectly fine once you set the SSID and password. Once you try and expand it however, things don’t always work the way you want. Add to the equation the different standards such as G, N, AC, etc., and the different frequencies such as 2.4/5 GHz, and things get even more interesting when you try and expand it.

So how do you get the most out of your wireless network? When it comes down to it, most if not all of the issues are caused by incorrectly set channel frequencies and interference. The truth is by default many of the wireless routers and access points try and use the same channel frequencies and do not always do a great job at detecting other devices on your network. In addition, they often conflict with each other and rather than extend your network they actually make it worse. They are in essence fighting for the same air space especially if they are somewhat close together.

In a typical scenario, you might have a 2.4 GHz wireless router operating on channel 6 on one side of the house, then you want to extend that same SSID by adding an access point so that you can get stronger coverage throughout the house. What you might end up with instead is if the access points and wireless router are on the same channel, they may fight each other resulting in a reduced signal (see the picture for an example). Another words, the signals will drown themselves out if they are on the same channels in areas where the signal collides. What you really want to do in that scenario is to put the wireless router and access points on different channels so that do not overlap. This way as you walk around different parts of the house with your wireless device, it will attach to strongest signal (assuming your device supports it) without being confused which device is stronger. If you look at the coverage map below, you will see that when setup correctly, each router/access point can co-exist without interfering with one another if they are broadcasting on separate channels. This extremely critical when trying to use the same SSID, though it is great practice even if they are on separate SSIDs. 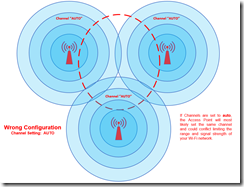 Correctly setup wireless network with every point on a different channel 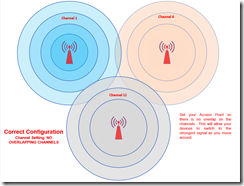 In my particular setup, I use 4 access points, some are on different SSIDs for specific tasks such as cameras, and some are on the same SSID and are used for extending. I will be adding 1-2 more to extend coverage into the garage and into the back patio in the upcoming weeks. I have a particular use case that is unique to me however it gives you an idea of what can be accomplished (see my other post for more information) when setup correctly. I have spent some time tweaking and adjusting the channels to give me solid performance and range across all these access points with minimal interference. Obviously if you have a simpler network, the task of tuning is much easier. Just to clarify, some manufactures devices are aware of other devices on your network, however when you add different manufactures and model numbers, your chances reduce significantly that you will get the maximum results. 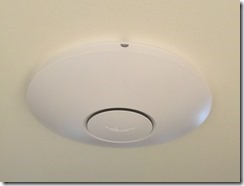 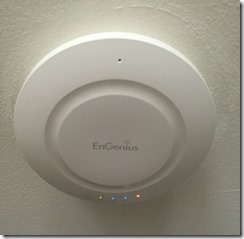 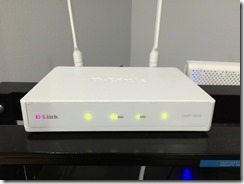 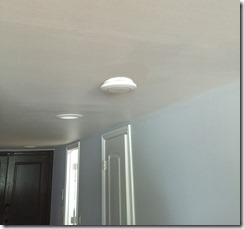 Suggestions and Other Things to Consider

With a little experimentation and a bit of work, you should be able to expand your network by adding an access point and gain the bandwidth and signal strength you want, and significantly increase the usability of your wireless network.