One topic that I am frequently asked about is my backup strategy.  Most people do not back up their stuff and when something happens they are devastated.  It seems as no one wants to spend any time or money in protecting their data until a disaster happens.  When people ask me about how I backup, I try and explain what I do but it seems to complicated to make sense which is what prompted me to create this chart as it is often easier to see it on paper.  Since data protection is becoming a major topic, I decided to try and simplify what I do in order to be able to explain my process better.  Below is a flowchart of how I backup my data.  There is no right or wrong way as long as it works for you and that you have at least 3 copies of your important data in at least two locations.

As my QNAP TS-453B NAS is my primary Storage for the house and I use it for everything except movies, I attempted to utilize some of the native apps that come with the QNAP NAS as it makes the most sense and utilizes the tools you already own.  As my NAS is divided into 3 separate volumes based on how critical the data, it makes it pretty easy to determine what gets backed up.  I have an encrypted volume for personal data and a different volume important information such as photos and software that get copied to my other QNAP NAS (TS-451) to their respective volumes.  Each NAS has an encrypted volume so the encrypted data gets synced to the other encrypted NAS and the regular data gets synced to standard folders.  For this task, I use QNAP’s native Hybrid Backup Application which is a flexible and powerful backup/sync utility that is available on virtually every QNAP.

The same data that is copied from NAS to NAS is also copied from my QNAP NAS (TS-453B) to my multi purpose server using AllwaySync.  The server is used for not only backup, but also as a Plex server for the house.  I created an encrypted volume using VeraCrypt and copy all the sensitive data to that volume.  As the final step, I take a subset of the data that gets copies such as photos and critical data and again use the native QNAP Hybrid Backup application to copy to Amazon S3.  It will support many of the cloud services but I use S3 as it is fast, and once your first pass is complete, is pretty reasonable in price.

I came up this backup schedule which I feel works for me and minimizes risk.  It maybe too much or too little for your needs but this is what I came up with over the past years of trial and error.  I hope this helps you in some way and whatever strategy you use is fine as long as you are backing up. 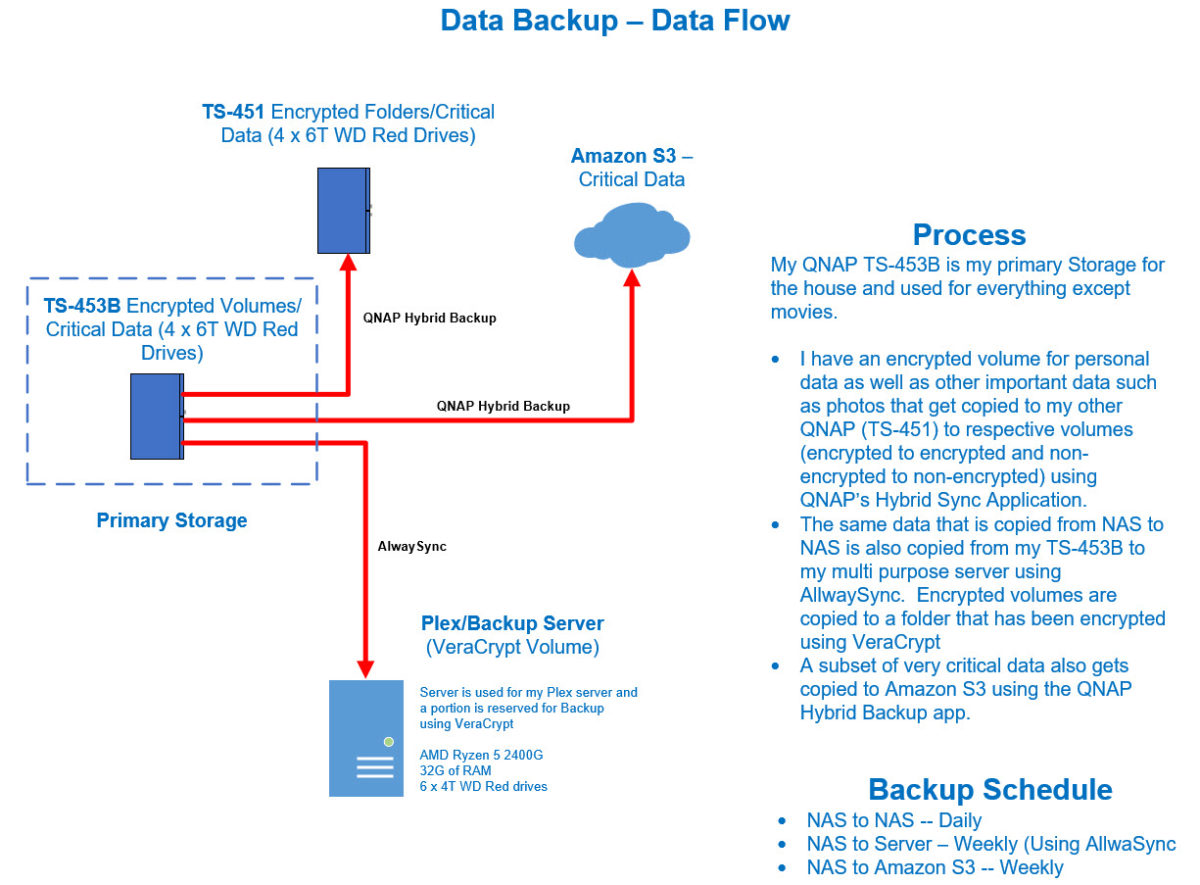