Upgrading My CPU and Dealing with Heat

One thing you can count on in the tech world is the need for constant change. Just when you think everything is running great, something changes that causes an avalanche. I have been running my VM server for a few years and it has been at the core of many things I do. When I moved, I was forced to mount my server it in a closet using a vertical rack mount to avoid putting too many computers in my new office. Up until recently, that seemed to working just fine and I did not have any issues running the server in its new home. The primary use for the server is running a Plex VM, Blue Iris in an another VM, and some test machines I use for various things. As I began to increase the number of cameras during my security upgrade, I noticed the virtual CPU was beginning to max out and I was suffering from some performance issues on the Blue Iris VM. To further complicate things, because of the extra load, multiple transcoding streams from my Plex server were becoming more and more challenging due to the shared load of the server. It was becoming painfully obvious that I needed more CPU power.

I thought about separating the major workloads into two separate physical machines but did not have the room to setup two machines. As a compromise, I decided to upgrade the Core I5-4570S low power CPU (6623 Passmark score) with a Core I7-4770 (9815 Passmark score). I figured 40% more CPU power would scale nicely in this particular application and should address any performance issues I was having. Unfortunately, after installing the new CPU and running it for a week or so (thinking I had solved my problems), I found that the CPU temps were consistently hitting 102-105C which is way too hot for my taste. What I had foolishly overlooked was that the lower power CPU was well suited for a 2U case mounted in a closed closet as it did not produce much heat, however the Core I7-4770 was a different story. Two things were for sure, I did not have any other place in the house to mount the server so I was stuck with the closet, and the 2U case that I was using was not going to allow me to use a larger cooler. I considered water cooling but in the end decided to go with a different case and use a Fractal Design case I had left over from a prior build. Using this case would allow me to install a monstrous CPU air cooler to help deal with the heat load and provide superior air flow given the 3 120mm fans in the case.

Given the original low profile CPU cooler, the new Noctua NH-U12S cooler is massive and does an phenomenal job in cooling your CPU.  I have used many Noctua coolers in the past and have always been impressed the performance and very low sound levels.  This new one did not disappoint, and the build quality is simply outstanding. 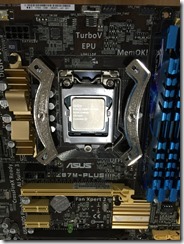 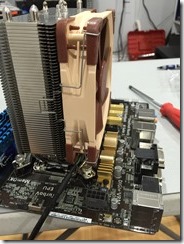 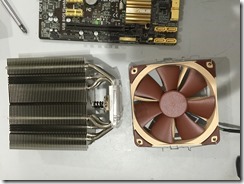 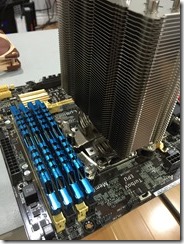 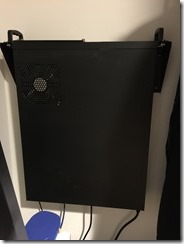 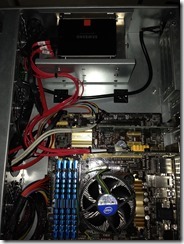 The new case offers far superior air flow and most importantly makes room for the extra large Noctua Cooler.  Since most of this houses SSD drives, I certainly do not need the case to be this big, however for adequate cooling it was the only way to go. 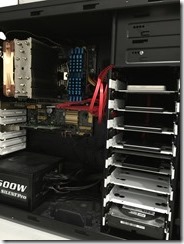 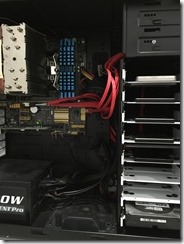 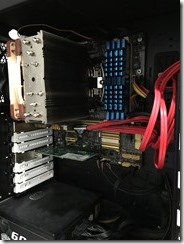 Though the server reached over 102C using stock cooling and a 2U case while mounted in the closet, the new case and the Noctual NH-U12S in the same environment now run around 52C.  It is much more significant drop than I expected to see.  It demonstrates without a doubt how important the cooler and air flow makes on your system. 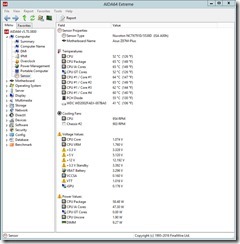 As you can see from the pictures, the end result was not only clean and functional, but it allowed me to leave it in the closet and lower the CPU temps by around 50C! I could not be happier with the result and the performance is exactly what I needed to stay ahead of the performance curve. If I need more power, I will have to wait for next gen architecture or find a second closet for a second system….