I have always been intrigued by Sonos for a couple of reasons.  One was the claims of perfectly synced audio in every room, and the other was the prospect of good sound quality from a wireless device.  Being a bit picky with audio quality I was certainly skeptical, especially with the new small stand alone speakers.  Having tried most every other whole home solution, I did not have much faith that this would work especially since it works totally on wireless, and had to have the range that allowed it to work from upstairs to downstairs.  Since I will be moving soon, I wanted to start looking now for a whole home solution that worked, and hopefully build it up slowly so that I would have everything by the time I moved.

My goal was to cover at least two rooms to start with so that I could test the audio sync claims and begin testing the viability and reliability of streaming high quality sound throughout my house wirelessly.  For starters I bought the new Play: 1 as it is small and claimed to pretty good sound quality.  It was easy to place in the bedroom or bathroom to facilitate listening to podcast or music as I get ready for work.  To cover part of the downstairs, I bought the connect which is ideal for connecting to a receiver, and lastly I bought a bridge for connecting the Sonos to my network.

This is an extremely small speaker with amazing sound for the size.  Considering is small stature, a single speaker did a pretty good job filling the room with sound in a 12×16 room.  Don’t get me wrong, it will not bring house down with thundering bass and glass shattering volume, but I have yet to hear better sound from a speaker this size.  that said, it would be better for a room that size to go with the slightly larger version or possibly putting two in a stereo configuration which would would do a better job with ambient sound.. 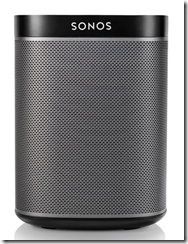 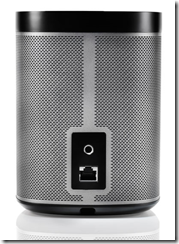 This is more of a necessity than a luxury.  This is the device that you will use to connect your Sonos speakers to your router.  It basically bridges the proprietary SonosNet to your router allowing the connection to your network as well as the internet.  You may not need one if one of your devices are close to a router or switch as each Sonos device can act as a bridge on its own, but I choose to use one to facilitate the install and provide an easier way to grow the system.  Had I bought the “Connect” first, I would have not needed the bridge as it would have done the job nicely and tucked next to my receiver and the adjacent switch.  Since I built this over a few weeks, I already had the bridge so I decided to use it.  Either way this is an in-expensive device that simplifies the install depending on your particular layout. 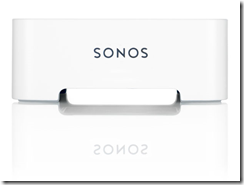 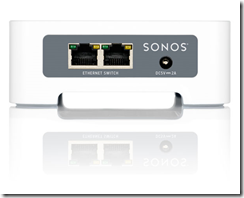 This is the device that adds a new dimension to your home audio, however it is a tough pill to swallow when it comes to price.  If you have an audio receiver you will definitely want one or more of these to take advantage of the streaming power of the Sonos system.  The device is simple by nature as it allows you to connect any receiver to the Sonos network.  It is so simple that is shocks you that you have to pay $349 for this device.  When you buy one of their speakers, you can touch, feel, and interact with something so you feel like you are getting your monies worth, however this device serves a very critical function but because you do not see or interact with it, you are left with a feeling that the item is overpriced.  That said, it works great and the ability to stream to your audio receiver is awesome.  Once you get past the price thing, you will love the functionality and simplicity of the setup. 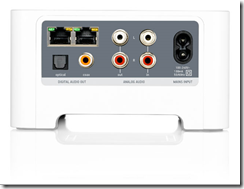 The system can be setup from a computer, phone, or tablet.  The initial configuration is about as simple as it gets.  I chose to configure everything on my phone and had it running in less than 10 minutes including the firmware updates for two of the devices I bought.  If you can follow a few questions, and press a button, you can setup a Sonos.  As you can see, the device setup is pretty painless simply by installing the app, tapping a button, then following the prompts on the app.  As I said earlier, this is brain dead simple.

Setting up Your Media

This is the part that was the least intuitive.  It is pretty straightforward if you have everything in one iTunes library or one folder on your computer/server, but if you have multiples you may get some strange results.  I have two iTunes libraries in the house and I was seeing duplicate playlist and other weird things.  I am sure it was something I did and that can be fixed, but it was annoying none the less.  The actual process of pointing to your media library is pretty each so if you install is basic, it should be painless.

The mobile apps have just been redesigned and are much better in terms of user experience.  They address most of the weaknesses from the old version and  are very powerful.  I still found the screens to setup the music library and playlists a bit confusing, but the rest of the apps was pretty straightforward. 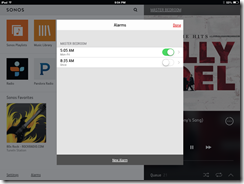 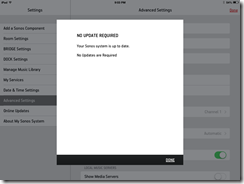 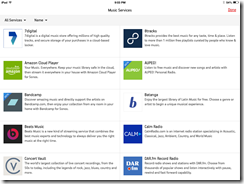 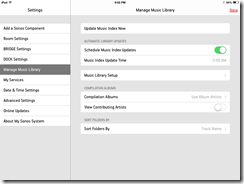 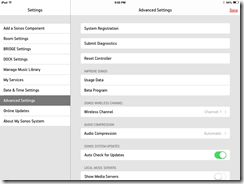 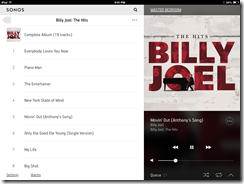 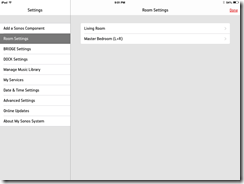 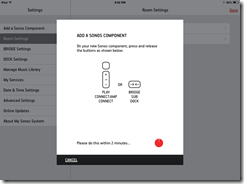 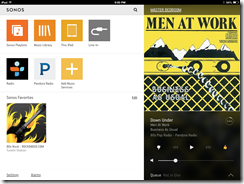 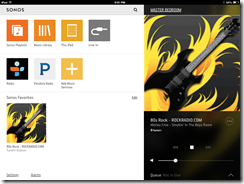 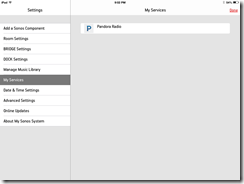 Here are some snapshots of the Window desktop version of the software.  Very straight forward looks very similar to the tablet versions. 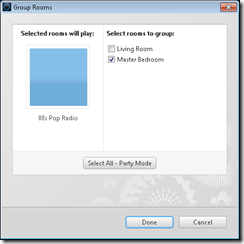 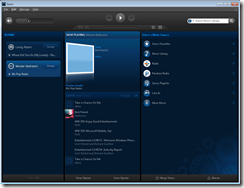 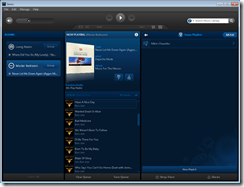 As things go, I could not afford to do everything I want to do all at once.  The nice thing about Sonos is that it is very scalable so it is very easy to add, reconfigure, and grow the system.  This chart shows what I started with and where I plan to go.  Obviously, things may change and I might increase or decrease the future plans, but right now I am budgeting to add one piece every month till I build out my house. 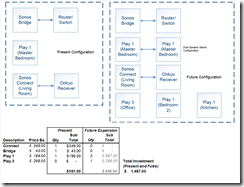 Overall I am super pleased with the Sonos System and I am really enjoying their new app.  I did not think I would but I am using this everyday for listening to a variety of content, as well as use it as my alarm clock in the morning to treat myself to some quality sounding music.  I am excited about acquiring the rest of my devices over the upcoming months so I can push the system even more.  I have had these now for about 7 weeks and unlike most items I buy, I am still using them everyday, and unlike most items, I am still impressed every time I use it.  Obviously it is hard to get over the price but I think once you try them out it will be hard to use anything else.  As I write this, I have already purchased a second Play :1 to supplement the single I have in my bedroom as well as to test the ability to easily configure two devices in stereo mode.