A couple of years ago I tried using PlayOn to stream media to my my devices.  I always thought the concept was good but back then, I had many issues getting things to work correctly.  I do not remember all the details only that it would consistently disconnect, lock up my system, and was generally buggy.  I remember having bought a license for it and when I sold my system I had forgotten to remove the copy.  Within two days I received a rather threatening email from the company suggesting I was pirating the software.  That combined with a poor user experience left me never wanting to use this product again.  Move ahead two years to today.  I have mellowed a bit on the bad experience and MediaMall has added a ton features to their product.  So not wanting to be close minded, I decided to try again.  After all, they had two years to make this awesome right?

To test this, I used a fresh install of Windows 7 in a VM with only security essentials to avoid any type of conflicts. I figured that this would prove to be the best experience with the least variables.  As I began to get my testing started, I immediately came across my first problem.  It seems that when you select to stream your own media, PlayOn will not remember any network shared folders in its configuration.  After about 6 or 7 attempts, I finally resorted to copying some files to the local drive for testing.  That allowed the configuration to be save, even though this is not a practical solution and the problem is downright silly.  The second annoyance I ran into is setting up the internet streaming.  First off, you can’t setup internet streaming unless you first configure the mobile version within you network.  Forget the fact that you know the IP, want to use a DNS forward, or anything else for that matter as you have absolutely no options to configure your connection.  It is setup for you automatically and you cannot make any changes whatsoever.  I use a DNS forwarding service  so I do no have to worry about changing IP address, but on this thing, that is not an option.  Even after your first configuration, you cannot make changes as it does not allow you to change the configuration in any way. 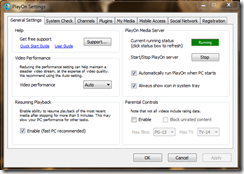 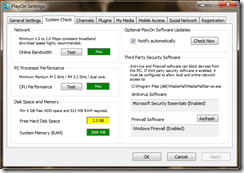 Excellent choice of services.  The ones I tried where less than special, none the less, it is an impressive list of supported services. 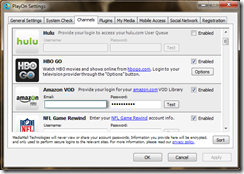 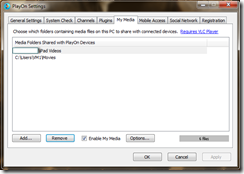 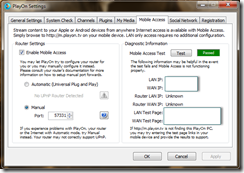 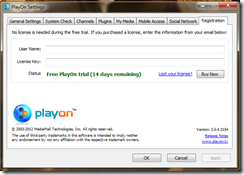 My third bug (so far) is that this software just nails your CPU doing nothing and just idling.  As you can see below I am using 32% of the CPU doing NOTHING.  That is absolutely unacceptable and unnecessary considering other comparable packages barely use that much when then are transcoding or converting.  This just shows there lack of attention to details.

As you can see from the several screen shots below, the user interface for the iPad apps are pretty bad and not well thought out.  Although I did not picture it, there are many small interface issues when rotating portrait/landscape as well as how it shows the previews of your content. 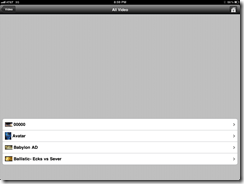 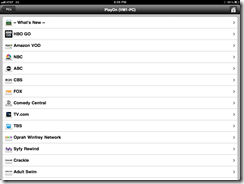 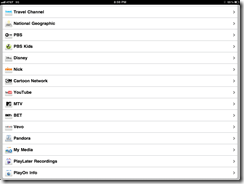 Absolutely the only salvation for this software is sheer number of services they support as well as the package deal of getting a lifetime license and a Roku LT for $79.  On its own, this is one of the worst packages I have tested in while and to my recollection, even worse than the first time.  Unless you absolutely need to support all these services to an internal network, I would look elsewhere for a solution.  This is poorly thought out, poor user interface, buggy, and in my opinion not worth the cost.