Air Server-AirPlay for your PC

Every once and awhile you run across a product that not only works but find very useful. It may even solve a problem you did not know you had. Air Server is one of those products for me. As I run a mixed household of Windows, IOS, and Android, I am always frustrated at the fact I could not beam my content from my mobile device to my Windows PC consistently amongst the different platforms. I have a couple of Apple TV’s which allow me to do this and work great, but I am limited to the sets that have one. I wanted to be able to sling my stuff to my HTPC, laptop or any other computer. There is no denying that AirPlay works flawlessly with Apple devices, and Miracast redefines the words buggy and temperamental to the point I gave up on trying to use it. That said, Air Sever allows you to use both AirPlay and Miracast on the same system. Most importantly for me, it allows me to play content to any of my PCs, as well as providing the capabilities of mirroring my IOS device to a PC for things such as photo and video playback. At last, there is a very reliable solution that works and feels like a native function and not a half-baked solution. To be clear, both Miracast and AirPlay work on this but setting up Miracast was much more effort as you have to have specific NDIS drivers, and seemed (as most Miracast setups do) to be a bit more finicky. In order for the AirPlay version to work, you have to have Bonjour installed which should be already installed if you have iTunes running, if not you will have to download and install it. The setup process took about 2 minutes and I was up and running streaming content from my iPhone.

Mirroring on a Windows 8.1 laptop 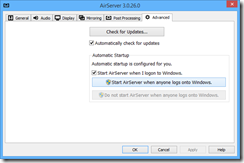 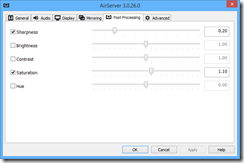 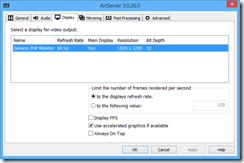 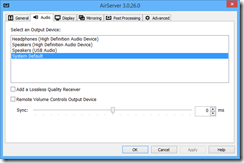 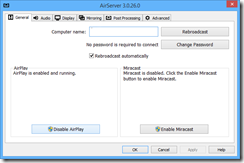 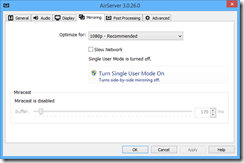 In short, I think this application is outstanding and adds a new dimension into a mixed household. More and more people are using their phones or tablets as the epicenter of their media world, and this bridges the gap to the big screen very nicely. Add to that the capability to mirror, record, and stream audio only and you have a great addition to your capabilities. One thing I might mention is their licensing is a bit tricky. The product costs $14.99, however the more you buy the less it cost per license. I bought the first one, then went back and bought two more and paid $10.99 when I bought the two. I mention this because unlike other software, if you try and install this on a second PC using the same license, it will not activate and only run in trial mode. Each install is validated on boot up so if you like the product after you run the trial version, make sure you buy them all in one shot so you can take advantage of the heavy discounting.